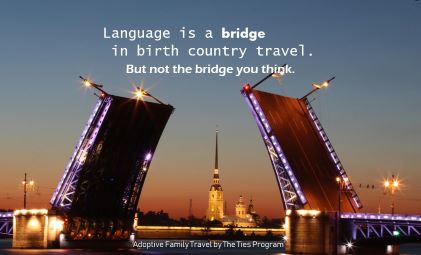 Language is a bridge, but not the bridge you think.

For most adoptees on a homeland journey, language and the ability to communicate is an immediate piece of the journey and has a high impact on identity development.

Very few adoptees are able to speak their birth language.  As a result, their first interaction with people in their birth country is usually awkward and unsettling.

Thankfully, for adoptees traveling with other adoptees, the moment happens almost simultaneously.  Practically in unison, we hear, “I was at this shop and this lady was talking to me and I had NO IDEA what she was saying!”

Language (or lack thereof) is a bridge that connects.

Because awkward things tend to feel less awkward when they happen to other people at the same time, adoptees do something really wonderful at this point.  They use the experience as a bridge to one another, bringing them closer together and better able to help each other as they explore identity. Amazingly, something that divides can also connect.

When I do workshops, I try to help participants understand the feelings created in these awkward moments. “Close your eyes for a moment,” I request. Then, I say, “Raise your hand if you have ever walked into the opposite gender restroom by mistake.” The discomfort in the room becomes palpable, even without others being able to see who has raised a hand and who has not. (Nearly all hands are always raised. 😊)

With eyes still closed, I ask the audience to think about the scene and what they felt. We talk about the feelings of embarrassment. Most remember quickly trying to find their way to the correct bathroom and hoping (really hoping) their blunder had gone unnoticed. We acknowledge that the self-talk was no doubt less than positive, internalizing negative emotions about themselves.

Then, I ask them to open their eyes and say, “Now imagine we all walked into the opposite gender bathroom together.  What would we be doing right now?” Laughter ensues and the energy in the room suddenly changes. “We would all be laughing like crazy,” someone will offer. Yes, we would be joking and laughing, and for time immeasurable, we’d retell the story because it was something fun that happened together rather than something miserable that happened in isolation. It would create a bond between us.

That is what happens with the awkward language moments when adoptees are traveling with other adoptees. The experience allows them to internalize positives rather than negatives.

It gives them space to be who they are without judgement, a powerful piece in identity development.

Many adoptees traveling to their birth country talk about wanting to learn their first language so they can connect better with people the NEXT time they visit.  This desire seems to reflect the hope of integrating “where I come from” with “where I’m going” and speaks to intention if not action. In reality, very few adoptees return home and actually learn their first language.

Learning first language has been a topic for as long as adoption has taken place. On many adult-adoptee panels I have attended over the years, a question related to language has come up many times.

A parent will invariably ask the panelists, “When you were younger, did your parents encourage you to go to language classes?  If yes, were you glad they did?  If no, what do you think about it now?”

The answer usually sounds something like this, “Yes, my parents encouraged it, but I didn’t want to go.  Looking back on it now, I wish they had made me.”

Does that mean you should? Not necessarily.

Next up in this series: Blending In and Standing Out. Watch for it in a about 10 days! (Note-by requesting to receive our blog, you will receive notification when each part in the series is posted. If you already receive our mailings, no need to subscribe. We’ve got you covered!)

Read the Intro to this series.