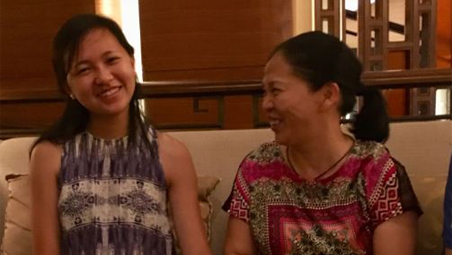 Lia, 16, a China Ties participant, reflects on what led her from heartache to healing.

Summer, 2001. An elderly couple hobbles up to a promising gate guarding a quiet orphanage with a baby swaddled in a soccer blanket. A girl, who wouldn’t carry on the family name or have the responsibility of taking care of her parents in their senior years, wouldn’t do their family any good. The law stating that only one child is allowed sealed the deal; boys were better. Setting the child down before daybreak, they disappeared back into the streets and into a world I could’ve called home.

The only thing I have of my birth country, China, is the note my grandparents left with me and my foster family’s email address.

China never meant anything to me. It was a land riddled with abandonment and apathy for its daughters, and the holiday emails I received from my foster family always held a tinge of heartache and a bit of stomach sinking. I know these people once took care of me, but they didn’t want me enough to pay a hefty fine for another child and I took it as deeply insulting.

I abhorred China no matter how many times I tried to convince myself otherwise.

I did until I went there on a heritage tour with other adoptees.

I hated China until I met the culture and the people. The other adoptees on the trip were like me; a little battered, a little bruised, but still intact and smiling.

In the evenings, women would gather in public areas to dance with each other, and children would laugh and chase each other as their parents tried to round them up. I remember so clearly the way the elderly couple slow danced in the park to dim music and the smile that crept up on my face and that familiar stomach sinking feeling.

What if those are the people that left me? What if I just passed my mother? What if that little boy was my brother? Questions barreled into me at every turn through the trip.

On the flight to my city, Nanchang, I lost it. I started crying and let fat globules of tears run down my face and drip onto my lap. The questions caught up to me and my mind was buzzing with disbelief and confusion, and in the same day it disappeared.

After landing, I saw my orphanage: pastel colors, too many cribs, and not enough parents.

And after the orphanage, I saw them.

They walked through the swinging hotel doors and they were real. They were so real and I could finally see the way they walked and how they acted and who they were.

My foster family greeted me as if I was their daughter. My foster mother wouldn’t let go of my hand. Our translator had to work hard to keep up with her, and when it was time for them to leave, it still didn’t fully sink in that they wanted me.

The next night we went out to dinner, and they reserved a room and a table filled to the edges with freshly prepared dishes. Dozens of pictures were taken, but not nearly enough.

My revelation didn’t come until arriving back to my home country. Wait, I thought. They wanted me. I wasn’t just a charity case or a mark of abandonment and shame, I was wanted. Finally, I was wanted.

Summer, 2018. I step into Cleveland Hopkins International Airport and I don’t feel hatred.

I feel rejuvenated. I feel happy. I feel wanted.