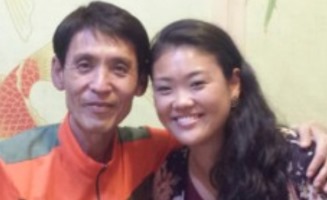 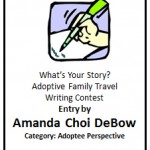 I remember I used to have this thousand piece puzzle. It portrayed a red barn on a lake, lots of trees, and an old battered canoe. I would spend hours finding a home for each little piece. I remember the water was particularly difficult because it all looked so similar. Why did I enjoy wasting away so much time doing this puzzle? There was nothing like that sense of satisfaction at completion, the ability to see the whole picture. One day, I realized I had somehow lost a few pieces. Even though I could still see the barn, the lake, and the trees, I couldn’t help notice those few voids of nothingness.

I got a call from Pat, the Programs Manager of Korean Ties, just before I went. I will never forget her telling me to sit down. I remember hearing her tell me that it was my birthfather, not my birthmother who had kept me for six months. He was alive, along with a grandmother, and two half siblings. My birthfather’s best friend (let’s call her my stepmother since she later married my father) was willing to meet. Oh Pat. Her advisement to sit saved me from falling over. I was very calm and controlled on the phone. I like to think of myself as someone that handles herself well. I hung up and cried my eyes out.

If I had to use one word to describe my first encounter. CHAOTIC. Runner up? OVERWHELMING. An eruption of the Korean language rained down upon me. My stepmother was crying and hugging me and my sister was quiet, as overcome as I was. Somehow things eventually calmed down. I got to see the hospital where I was born and the area where I stayed for six months. 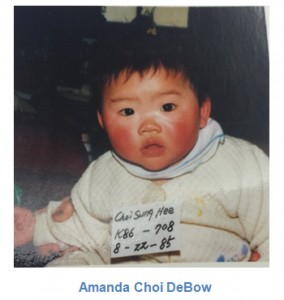 My brother and his wife joined all of us for lunch. He sat across from me, a complete stone face. They kept saying he was nervous. I remembered the time when, as a child, you were told to be on your best behavior at someone else’s dinner table. I felt the need to sit up a little straighter and smile demurely. While we were comparing skin tone, somehow the subject of my sweaty hands came up. I was embarrassed, for this trait has plagued me my entire life. Then I found out both my brother and my birthfather had sweaty hands! I was not alone! It was the first hint of a real smile from my brother.

That night, my brother and his wife dropped off a gift at my hotel. It was a traditional Korean wedding present from my stepmother (I had just gotten married a few months ago). You place this pair of wooden ducks, called Kireogi, on your nightstand. If you are happy, then you turn the heads together to make the bills kiss. If you are angry at your partner, you can turn one or both heads away. When I saw my brother he greeted me with, “Sister!” His huge smile made him look like a completely different person. I guess the dust had settled. The wedding ducks were a kind gesture, but that smile was the best gift I could have asked for. 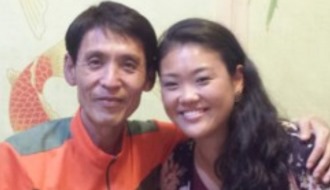 I thought that my family time had ended, but the next day the translator called. She told me she had managed to arrange a meeting with my birthfather. I got the call while out with the Ties group. My husband and I had to rush to our hotel to get ready while simultaneously trying to calm our nerves. The meeting was two hours away! The translator had to rent a car! We tried to get money and the ATM wasn’t working! It was our turn to pay for dinner! We needed a gift for my birthfather! They thought the meeting was at 3:30? We were going to get there at 5:30! They kept calling to see where we were!

I was ushered into the restaurant by my stepmother and as I was fumbling with my shoes and she was hurrying me inside…I saw him. A small, thin man in the frame of a doorway. I don’t think I could feel the floor through my socks as I walked over. We looked at each other and hugged. Any reservations I had immediately dissolved. We just held each other. I found myself in one of those rare embraces where neither party wants to pull away too soon. You just fit in each other’s arms like you were always meant to be there. As we finally pulled away, I looked into his teary eyes and knew that this man was indeed my father. I found out later that he had never given me up for adoption. From what I could understand, he came home one day and I was gone. He had been extremely depressed about the departure of his wife (my mother). In an attempt to drown his sorrows, my grandmother and stepmother gave me up in order to give my father a fresh start.

Yes, I had gone with questions to ask about my background. Yes, I was able to ask a few. But I realized that it didn’t matter. I didn’t care to ask about my health history or what time I was born. What mattered was the feeling of being with family. It was so incredible to find the invisible bond was somehow unbroken thirty years later.

We got back to the hotel and I cried (not the first or last time). I had met so much of my family in less than forty-eight hours. I was emotionally and physically exhausted. Later that night, the translator called. My grandmother was coming.

So the story goes like this. My birthfather must have called his mother when he got back from dinner. Well she was mad. And I mean really mad. Why had nobody told her about the meetings? They thought it would have been too much for her. Well my grandmother is a tough Korean lady, not even five feet tall. She decided she was going to meet me and nobody could stop her. She lived two hours away and I was leaving at six the next morning. No problem. She arrived at two in the morning with my stepmother and sister.

Her meeting was the most emotional of them all. She sobbed. She clung to me. A lifetime of guilt washed out of her and poured onto me. My own tears wouldn’t stop. How could they? I was exhausted already. And this poor little Korean woman was throwing herself at me, writhing in her own conscience. After things calmed down we had a wonderful visit. She left at three in the morning. She told me that she could happily die now because I wasn’t angry at her. As I was helping her into the car, she whispered to me, “I love you baby Sung-Hee.”

Many people did not have the chance that I did. Not everyone’s experiences are positive. But I was one of the lucky ones. I can finally see the pieces that had always been little voids in my life. At last, I have the satisfaction of seeing my puzzle completed.